All The Suits & Coats From Peaky Blinders

Peaky Blinders was recorded in Birmingham, Bradford, Leeds and Liverpool. With stars like Cillian murphy, Sam Neill, Annabelle Wallis and Helen McCrory – to not mention Tom Hardy, who joined in the second season, this is a must see TV series.

The Costume department has definitely worked their magic on set – with everything from 3 piece, tweed suits with matching bow ties to full length overcoats and trench coats, with all the cloths worn in the past (the show is set in 1919) has such class, everyone looks dashing – with shirts buttoned all the way up to their neck, and pocket watches hooked up to their waistcoats. 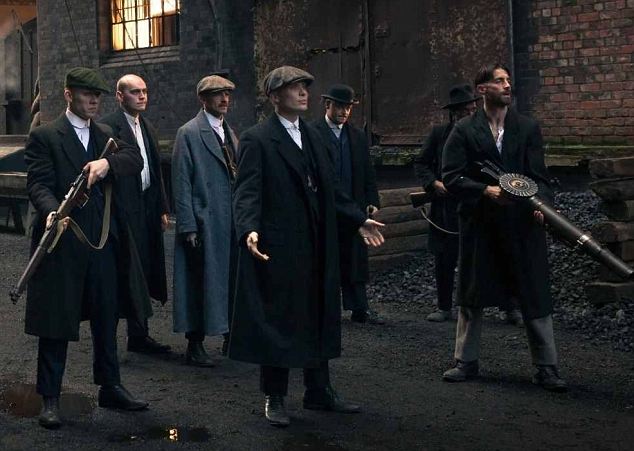 The plot
A gangster family epic set in Birmingham just after the first world war, the show is based on the historic peaky Blinders gang. The story centres on a gang who sew razor blades within the peaks of their caps (hence the title) and their bold, extremely dangerous boss Tommy Shelby.

The gang comes to the attention of Chief Inspector Chester Campbell (Sam Neill), a detective within the Royal Irish law enforcement agency, who’s sent over from Belfast to Birmingham to clean up the city and purge it of the gangs. The Shelby's stand their ground against enforcement, operating to create their own gambling empire!

Season 2
The second season is set 2 years after the first and sees the Shelby family expand their business into London, where they meet native gang leader Alfie Solomans played by Tom Hardy. 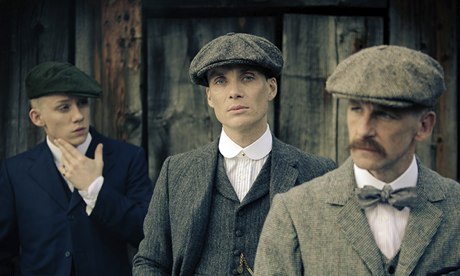 Cillian murphy dresses in a very mid-grey tweed with a standard notched lapel, matching lapels on the vest, and matching tweed buttons.

He also wears a rounded collar shirt with a double cuff – terribly stylish so – and even sports a pocket watch. There’s clearly been some thought put into how these gents dress. 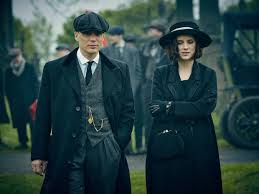 The Shelby's have great taste, as seen above and below in their black cashmere overcoats with contrasting collars and peaked lapels.

Get your overcoat in time for the winter by booking in now Birmingham, Belfast, Cork , Dublin. 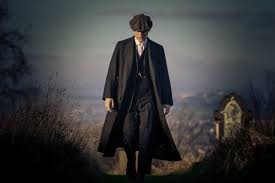 The ladies, played by ​Helen McCrory and Annabelle Wallis (and, in the second season, Charlotte Riley) are fantastic!

Here is The Fan Carpet’s Darryl Griffiths and Anthony Green at the Cineworld in Birmingham for the World Premiere of the first episode from Peaky Blinders, series 2.

A Hand Tailored Suit, the tailoring company offering you a slice of London’s Savile Row for a cut of the cost. Bespoke custom clothing for Men, Women & Children, we offer only the finest of cloths from only the finest of cloth merchants from around the world. Call us in the UK 0121 368 1052/ or IRE +353(0) 1 513 6665 Our UK studio’s in Belfast, Birmingham and our Irish studio’s in Dublin, Cork.  click here to contact us.