Share
For Series 26 Episode 18, the last full episode of the series before the compilation episode (and the new Series 27!), Graham welcomed singer, producer, and actor, Justin Timberlake, and his Trolls World Tour co-star and Oscar-nominee, Anna Kendrick. Also on the red sofa was Oti Mabuse, the Strictly Come Dancing star, and comic Alan Carr, promoting his new show Not Again, Alan! The musical guest was Sam Smith. Let’s take a look at the fabulous outfits from The Graham Norton Show. 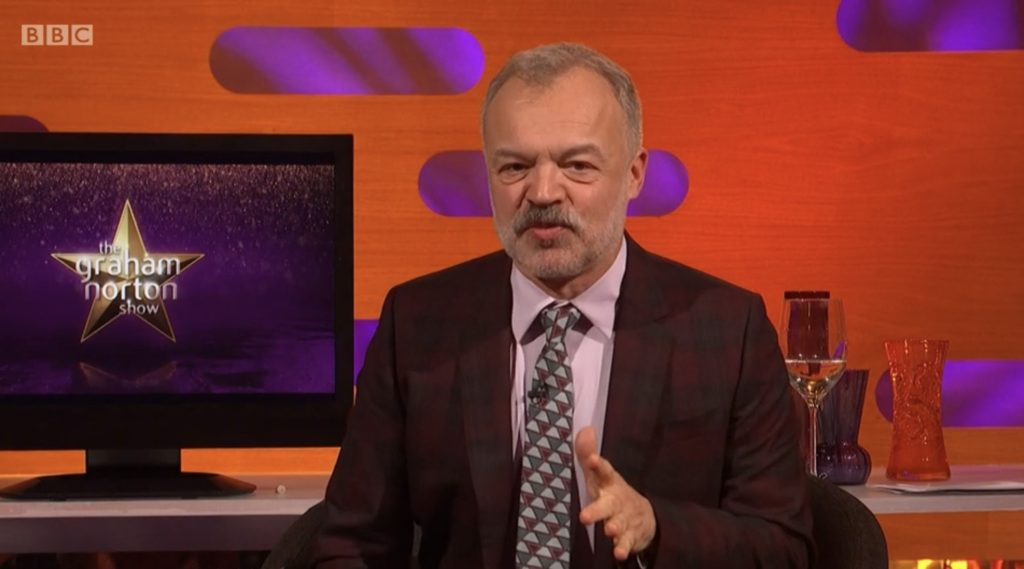 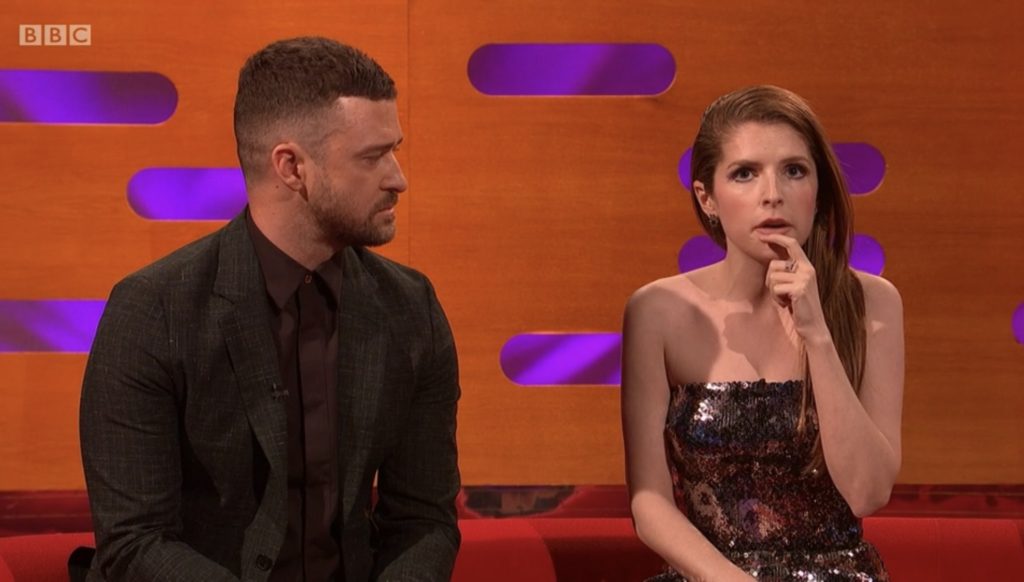 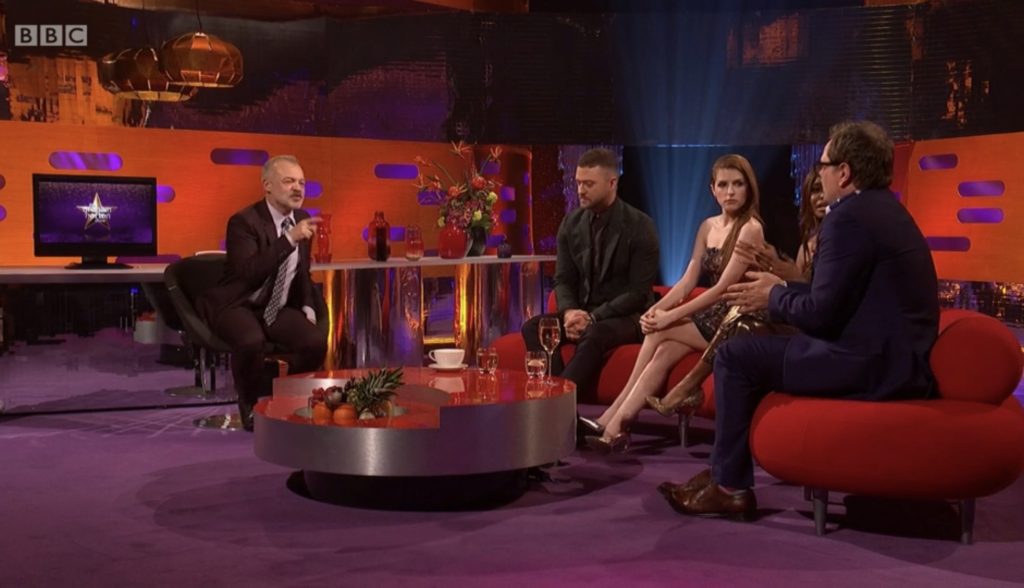 In this clip, Justin talks about how he did a charity event with the Rolling Stones and how it didn’t go that well with the audience.
Anna Kendrick
American actress Anna Kendrick is known for her roles in Up in the Air, the Pitch Perfect film series, Into the Woods, Cake, Mike and Dave Need Wedding Dates, and Trolls. 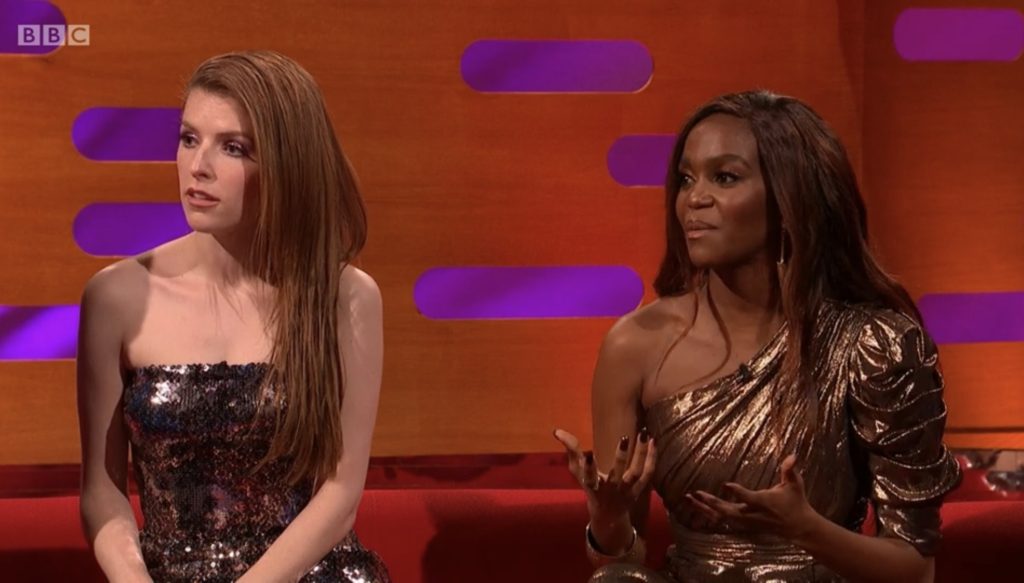 Anna donned a sparkly silver sequinned cocktail dress, cinched in at the waist, with silver pointed toe stilettoes. Her hair was worn straight and long in a rose-gold hue. 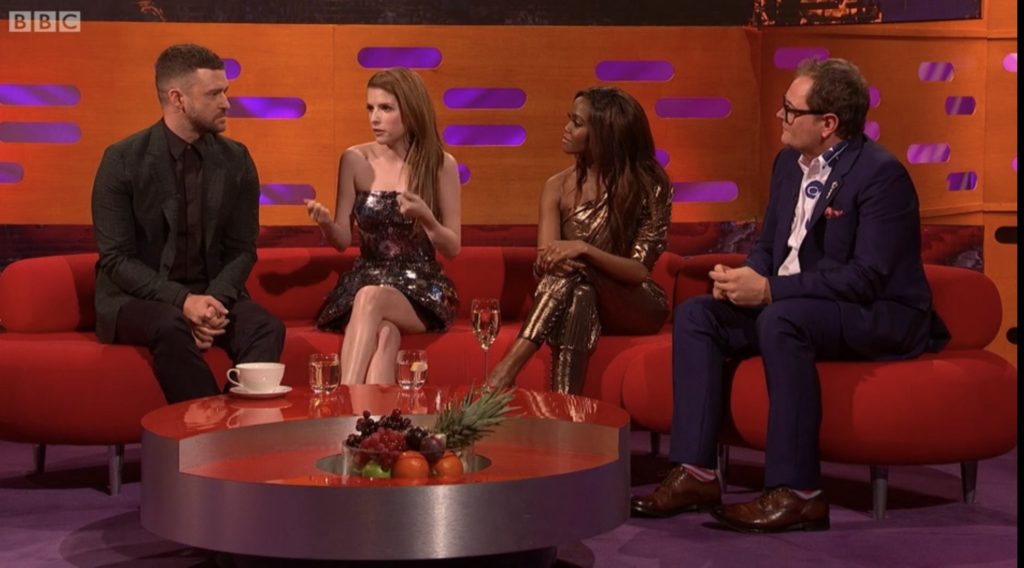 When she visited England, Anna talks about the time she stayed at a hotel and thought someone was doing a fake posh English accent. She later found out it was Gogglebox’s Steph and Dom Parker. Oti is in this clip too laughing at Alan’s joke.
Oti Mabuse
South African professional dancer, Oti Mabuse, best known for her time dancing on Strictly Come Dancing and the German version Let’s Dance. 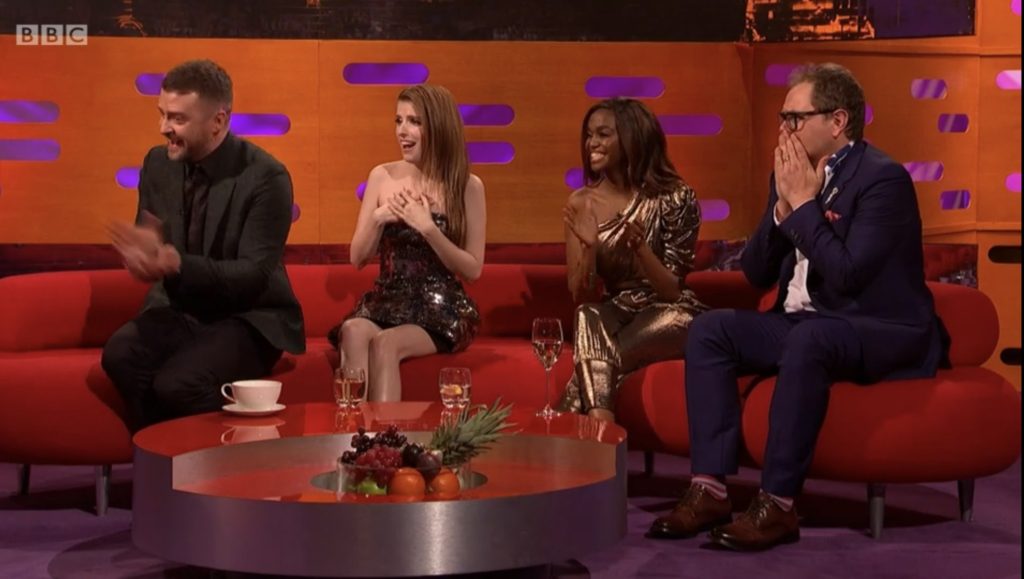 Oti wore a one-shoulder gold jumpsuit in a semi-Grecian style with a cinched ruched waist. The shoulder had a three-quarter length sleeve, ruched detailing, and is finished with a cuff. She completed the look with gold pointed toe glitter stilettoes, gold earrings, and a gold bracelet. 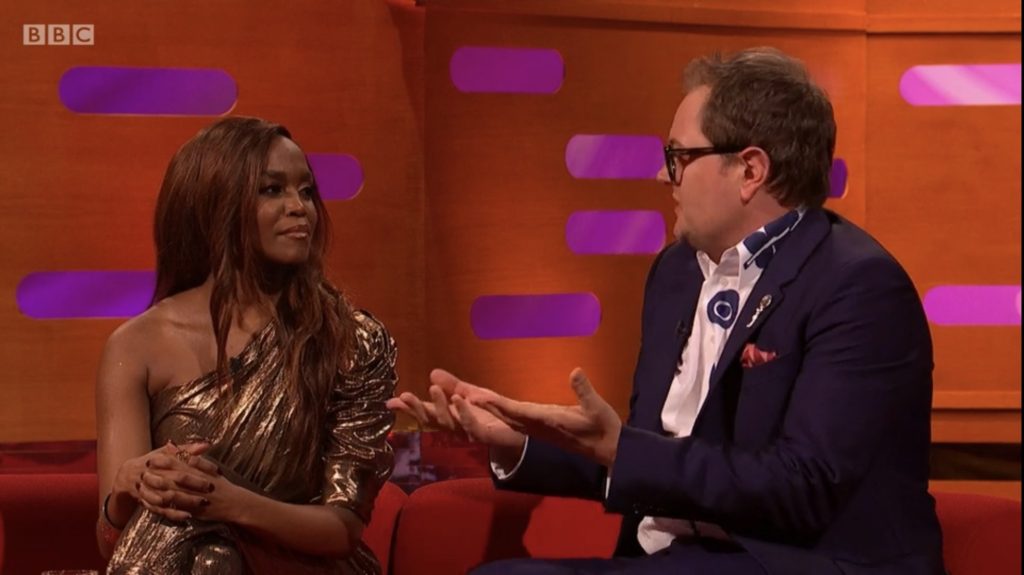 Alan Carr
Alan Carr is an English comedian and tv personality who won City Life Best Newcomer of the Year and the BBC New Comedy Awards. He had an entertainment show called Alan Carr’s Celebrity Ding Dong and Alan Carr: Chatty Man. He is sometimes a team captain in 8 Out of 10 Cats Does Countdown and has been a judge on Ru Paul’s Drag Race UK. He hosted a radio show, Going Out with Alan Carr, has written books, and is going on an upcoming tour. 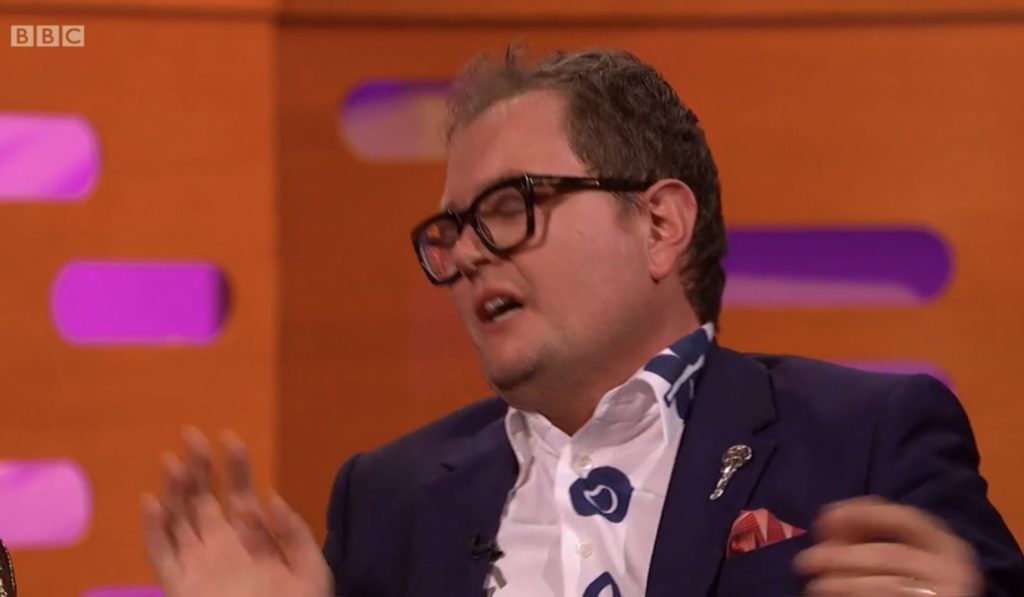 Alan was dressed in a stylish navy blue single-breasted suit with coordinated patterned white and blue button-up (love this!) with blue targets and circles and golden eyes and plants. He accessorised with a coordinating red and white striped pocket square, striped light blue and red socks, lapel pin in the shape of a key, and brown leather polished shoes. 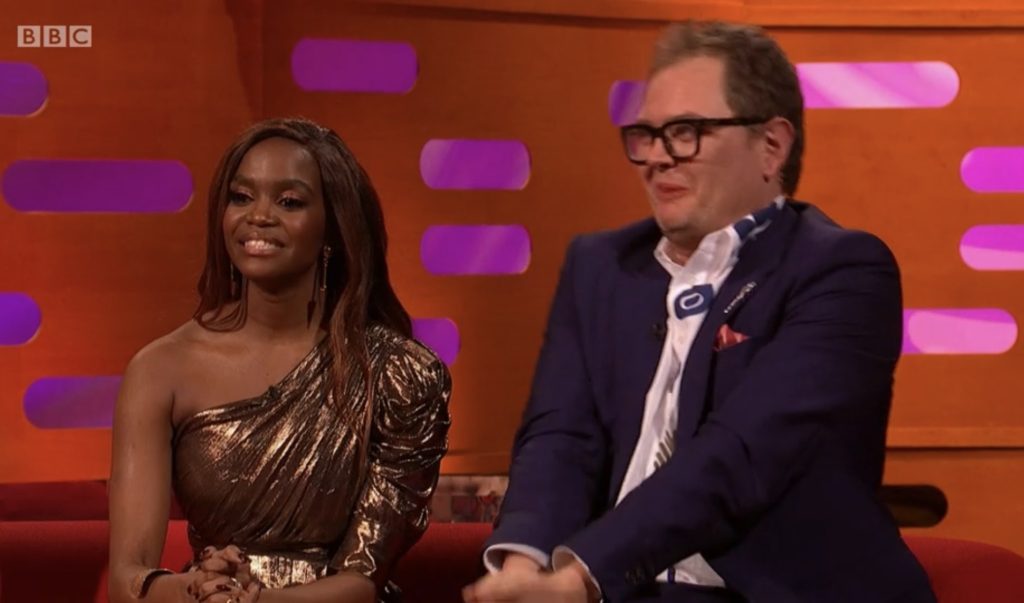 Alan discusses how Adele planned his wedding to his husband, Paul Drayton.
Which look was your favourite?
Tell us in the comments which look you loved the best.
If you need a custom, tailored outfit for an upcoming event or simply to look fab in the office, get in touch with our tailoring team today. We can create cuts that flatter from our range of luxurious fabrics, linings, buttons, trims, and more.
Can’t get enough Graham Norton blogs?
Want more Graham Norton Show looks? We publish blogs each week about the show and other fashion hot topics, from wedding suiting to celebrity award shows to Fashion Week around the world and more. Check out some of our past Graham Norton content below.
First nameLast nameSubmitAccount form fieldsData were successfully storedSomething went wrong, please try to store againThese fields can not be empty, must be checked, or have to be valid